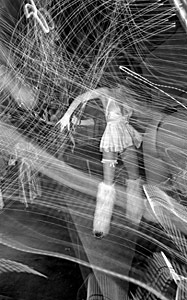 Hoped to do some printing Thursday night for the second Contax G Print Exchange. I had planned to make silver prints for this but there’s been no time for the darkroom & a dozen prints are due in Scotland in two weeks. Back to the Epson.

I thought of using the photo at right — already posted in this journal once. A few days ago I posted it to Contax G and to my surprise it proved terrifically popular, rapidly attracting kudos and the highest site ratings I’d ever had there; before the jpeg was corrupted by a database glitch a couple of hours later. Only a handful of people ever saw more than a 150-pixel thumbnail. After two days of struggling and failing to be allowed to replace the file, I ended up deleting it.

An object lesson in impermanence, pride turned quickly to humiliation by a few errant lines of bad code.

Putting it in a print, I thought, might make some faintly-ironic statement about the fragilty of the web, its mercurial nature and the perhaps unfounded faith we place in it — replaced by a stiff archival chunk of heavy stock.

But I’ve since realized that it would be an empty gesture. Few had seen the photo in the first place, the irony would be lost. Pick a different shot.

The incident has, however, once again indicated to me that shared gallery sites are not always a healthy place for photos. I’d already abandoned placing photos on photo.net a long while back — too much emphasis on high volume and a demand for banality, photos that confirm and conform to the Kodak-brochure norms. I think from this point I should just keep my web photos on my own site, save for special situations.