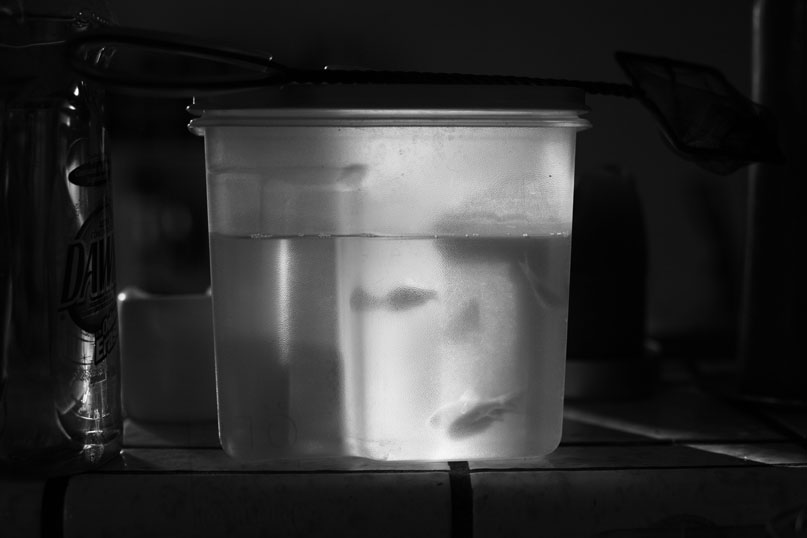 Right on the heels of the Conscientiously Gray list, both Jörg and Tim Atherton have cited this Charlotte Cotton essay on contemporary B&W photography, which in turn contains a fair number of interesting B&W links — and some great comments in the short but dense forum discussion on the right side of the page.

I’m struck by Cotton’s (qualified) emphasis on B&W as being inevitably nostalgic. I continue to disagree, given that B&W is a portion of human vision and evolution always wins. She is right, though, in recognizing that B&W photo isn’t going away, but will remain as part of the visual spectrum.

Cotton is also right, I think, in mentioning that given the world-full of color images in which we now live, B&W has a new inherent message: intent, “as a bid for us to remember that photography is an act of making choices.”

She mentions in her essay the Japanese Provoke group. When I was last in Tokyo I stopped at PlaceM, a photo-hub (clubhouse/bookstore/gallery) in Shinjuku owned by a collective including Daido Moriyama. Stepping into it it was clear that, at least in tech-fetishizing Shinjuku/Tokyo, there was still plenty of activity in B&W. I could have spent a fortune there on books. Come to think of it, I did — though some remain un-read. Perhaps this will give me a little extra incentive.

Recently in a StreetPhoto list thread the assertion was made that it’s impossible, or nearly so, to make an image envisioning the future without it being in color. My own take is that it’s simply difficult to make any assertion about the future, photographic or otherwise, if you limit yourself to the language in vogue today. In the 1980’s it was difficult to imagine a future of popular music that didn’t involve electric guitars and synthpop. But the fundamental expressive power of acoustic music and voice was not erased by the growth of technology or the fashion of the time. Sure, today we have bands playing heavier metal than ever, and producers and engineers making more polished and lushly-crafted electronic pop than ever. The branches of their steady growth have not withered. But we’ve also got Sufjan Stevens, Kings of Convenience, no shortage of acoustic and blended acts whose works can’t be expressed in the language of 1983 (on a recent VH-1 documentary of hair metal, one of the stars of that era classified newer acoustic music as “Tracy Chapman sh*t” — as if his ability to even conceive of music outside his standard range is limited to 1980’s references). When the status quo disregards any part of human nature, new forms will always rush in to fill the empty ecological niche.