Now CNN is reporting it too — the taste of the Hussein family for fantasy art.

Hmm, got a message from Michal Daniel that it’s already time for another street photography salon — photo web submissions are due tomorrow by midnight. This time the theme is “trace” and once again I haven’t gone and made a doggoned thing for it. Will have to dig through the archives, though I’d prefer to shoot something new.

Haven’t really had time for it this weekend, been struggling with last-minute tweaks to my taxes — might have to file an extension if I can’t find all of the receipts right away, though I’m happy to report that for Hawaii, California, and the IRS, I get refunds all around even without them. I just want to find the right receipts (mostly moving-related) so I can crank those refunds up just a tad more.

Picking through Dave Beckerman’s Journals on his printing process. Yeah, a lot of steps, many things to go wrong.

The darkroom here is partly re-assembled. I put the Durst back together, but the head wouldn’t light. Not sure if it’s the bulb, the wiring, a fuse in the power supply, or what. I only got to use this enlarger a very few times at the old house — it’s nicer than I remembered (if it will work).

The water situation in the new space is poor. That’s still the biggest limitation, one I’ve previously been able to bypass by just running negs in the kitchen and scanning them at my desk.

Overheard a conversation last week, two illustrators discussing one illustrator’s desire to take a photo class. The other thinks it’s a waste, “not that photography isn’t an art and all, but I don’t see how it has any effect on being able to make pictures.” 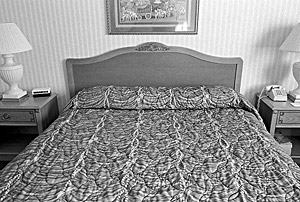 Watching the “Raw Video” clips over at reuters.com and as usual they rock. Being able to just watch the lightly-edited raw footage, without voiceover or some dopey camerahog doing a standup in front of a safe gate or highway berm, is a monumentally great and apparently not-well-known resource.

Today the feeds were full of Iraqi looting, of course. And a quick snip of the departing Iraqi delegate to the UN: “I love New York.” One long clip covered a tour one of Qusay Hussein’s so-far largely-unlooted palaces, along with the associated undestroyed yacht.

The palaces are fascinating in their bizarre mixtures of art, high, low, and indifferent. When the first footage of a Saddam residence showed up on Tuesday, CNN repeated showed a tall multiple-picture frame, the sides adorned with sprocket holes, to make some allusion to motion picture stills — the sort of thing you would find at any of the cheapest gift shops on Hollywood Boulevard. It was filled not with family snaps but official portraits.

Qusay’s yacht was decorated with Babylonian motifs, mixed with a large dose of Louis XIV gold trim. The house? Huge Boris Vallejo fantasy paintings, or perhaps simply commisioned knockoffs of Boris Vallejo paintings (the fortune you could get for those at Comicon, heh).

If the Iraqi government hasn’t already done so, someone should really create a catalog of Hussein art — not the art owned by him, per se, but the art of him. I wonder if any of it dared have a voice of its own, or if it all was safely kitsch, like that of the great dictatorships of the 30’s and 40’s so admired by Saddam. 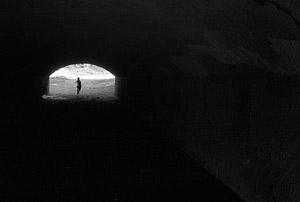 Okay, forget anything bad I ever said about TMax 100 (except maybe the drying part, and the mysterious pink stuff). These last rolls (coupla nights back) have made me a believer again. Crisp, broad latitude, good stuff. The last batch had a number of frames from something I’m calling the “infinity project” though it may be a while before any of it starts to see the light of day here or elsewhere. Looking at them gives me more ideas to improve it, and reassures me on the validity of some of the ideas.

No surprise, no Salon win for me. Maybe in a couple of weeks I can come up with something funny for the next topic, “Traces” selected by Michal Daniel.