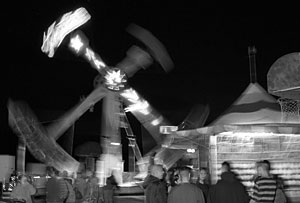 …and a little white.

I’ve read it a couple of times in the past, but today I re-read this interview with Ralph Gibson.

"But anyway, the big emphasis in digital photography is how many more million pixels this new model has than the competitor's model. It's about resolution, resolution, resolution, as though that were going to provide us with a picture that harbored more content, more emotional power. Well in fact. It's very good for a certain kind of graphic thing in color but I don't necessarily do that kind of photograph."

Sounds much like what I wrote about computers a couple of days ago — and Gibson is a big fan of digital, at least on the printing end of preduction. Surely his comments were a subconscious influence on my thinking.

At one time, I used a Canon 85mm lens for nearly everything. Now it (and my Zeiss 90mm) sit at the bottom of the bag, largely unused. Tried forcing myself to use the 90 today — if only, as Duchamp said, “to avoid conforming to my own taste.”