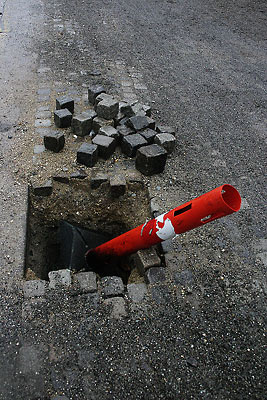 On my last afternoon in Toulouse, I had lunch with Ken Perlin of NYU, Naoko Tosa of MIT, and Ryohei Nakatsu of Kwansei Gakuin University. On the way over to the restaurant, I was churning mentally — I found myself quite unable to think of even a single word in Japanese.

I’d been speaking French for the previous several days, for the first time in years — after the first anxious moments (afraid I’d forgotten everything), I discovered that le français had merely lain dormant, and I had little trouble re-grasping it. But to my dismay, it had completely displaced le japonaise. Apparently my brain can only handle one non-English language at a time, and Japanese had been swapped-out to make way for French. It was infuriating — try as I might, my mind was just blank, blank, blank. It was only when I heard someone else speaking Japanese that the logjam burst, and the nihongo started bubbling up as the furansugo drained away.

A very strange experience, but one that I enjoyed in one key way — as an indicator of the limits of intellect, a kind of detectable mental wall. Such things are often hard to perceive. As a teenager, I had come up with a little aphorism that I declared:

In other words, the people who are as smart or smarter than you, and the complex processes beyond your mental limits, are things you’ll rarely glimpse, and never properly grasp (there are some theological implications of this notion too — ones that reinforce my general distrust of all religious institutions).

Makes perfect sense to me.

I’ve been feeling another, similar set of mental constraints recently as I use my DSLR more and more. The color is so supernaturally perfect, and so omnipresent, that I find it harder and harder to use the camera for black and white, even with a swell set of black and white profiles for Capture One. The color of everything overwhelms all other concerns (maybe it’s just the yellow glow in the neighborhood, suddenly awash in fallen leaves).

Yet not so for my Contax — black and white seems entirely natural with that familiar camera. Time will tell if I can negotiate this latest digital hazard.