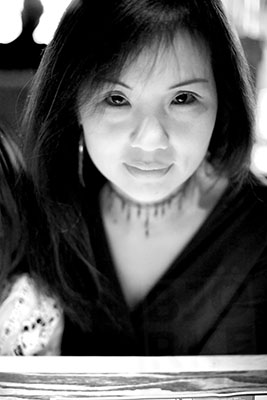 Both of my primary digital cameras now have the ability to save a full-sized JPEG image along with the corresponding RAW file. So I’ve taken to setting them both up the same way: with the JPEG stored as B&W, high contrast, and the color balance set to “AUTO” or “Daylight.”

This buys me a couple of things besides the obvious one: B&W photos that are B&W out of the box. It gives me the option of later tweaking the B&W conversion from the RAW files, but also — and I’ve found this to be genuinely useful — a strong, contrasty image on the preview screen that reads well in bright or dark conditions — even if I’m shooting in color.

The punchy B&W preview is useful as a strong litmus test about the immediate readability of an image. Not that all pictures need a crisp graphic style, but when they do, the B&W preview shows it.

When I worked a lot on TV commercials we would keep a bad B&W TV set around for previewing. There was a $3000 13-inch color studio monitor next to it. The B&W set was placed there by our postproduction color timing expert, who always wanted to preview everything on it to be sure the results of his work were truly readable.

A few years later, I attended a talk by an art director from Pacific Data Images, talking about Shrek, and they followed a similar method: they would look at every shot in both color and B&W. “If it looks good in B&W, the color will only add to the shot.” At Pixar, there were a few animators who would turn off the preview shading on their characters — the result wasn’t B&W images, but while working they got the figures down to their essential outlines, so that the scenes on the film would play with inerrant clarity.

I’ve also found, and this is doubtless some failing on my part, that if I see the picture only in color — if I don’t see it early in B&W — then I just never move it to B&W. In the world, while making photos, obviously what I’m seeing through the viewfinder is the full-color world… yet it doesn’t have, for me, the same psychological effect, the pictureness that gives it permanence, until it’s a picture. If it’s a color picture, I just read it at that. It’s easy to imagine a B&W picture from the world, but hard to imagine one from a color picture. I don’t know why this is, but it seems true for me. I react to pictures as pictures. Which is probably as it should be.

There’s a further technological spoon stirring all this up. Frustratingly, Adobe Camera Raw (ACR) simply refuses to honor the B&W-ness of RAW files from either the 5D or the LX-1. Canon encapsulates such data in “Picture Styles,” which they expressly encrypt or otherwise mask from Photoshop’s prying software. And I genuinely can’t even tell if Panasonic included the color effect information in their RAW format (Besides, I habitually convert all my Panasonic RAWs to Adobe DNG format, which only consumes about half the disk space).

For a while, I took the strategy of trying to set up ACR defaults per-camera, so that everything would come through set to a high-contrast B&W. But that was counterproductive since I only some of my photos are really intended to be B&W. ACR wants to give an all-or-nothing solution. The only good way is to keep the JPEGs. Better yet, sometimes the JPEG can be the final picture anyway.

Another option, which I’ve been somewhat surprised at, has been to make less use of ACR and Bridge, programs that I’ve really liked and had hoped would be the axis of all my workflow. At least for the Canon files. Canon’s Digital Photo Pro doesn’t have the scriptability of Adobe Bridge or the full power of Photoshop, but it does have the simple ability to honor Canon Picture Styles, and its color algorithms closely match (should be: identical?) the intents of the original camera-sensor (and picture style) designers.

As for ACR, I still use it all the time, and I reset the defaults to keep doing what it likes to do: assign the brightness and color and everything else according to Adobe’s own secret sauce knowledge. It does a good job. I know that I can always look back at the JPEG to get a glimpse of what I was really thinking when I snapped picture “IMG_6769” or “P2565811.”

Right now I’m more or less happy with how this is working. It saddens and frustrates me, thinking of the ongoing difficulties revolving around all the work I went through to get to this point, and the ongoing future storage headaches. But things seem, at least for today, stable and predictable. Maybe I really will be able to keep the same cameras and workflow for a long time.