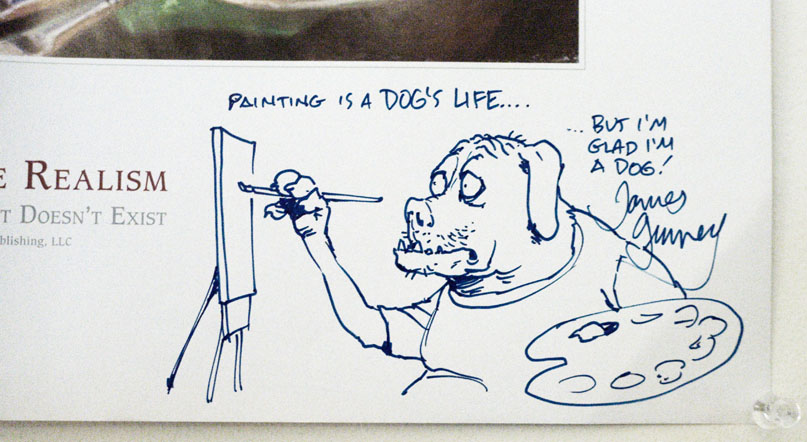 Paul Graham was kind enough not to name the unthinking reviewer who he says doesn’t “get” photography – which is odd, because you’d think he’d want to protect others from the potentially-insulting opinions he cites in this one-paragraph Jeff Wall book blurb by Carnelia Garcia in ArtInfo’s February ART+AUCTION (Garcia claims to be a museum “PR Associate” according to her LinkedIn profile – I won’t speculate further).

What Graham’s essay seems to miss is “how there remains a sizeable part of the art world that simply does not get” a lot of art – not just photography. ..

As a handy example I’ve added the James Gurney cartoon above, which he left us after a visit to Trion a few weeks ago. Gurney is a painter whose skill and talent are more than obvious, whose acclaim among other painters and the public are solid, and whose works are shown internationally in museums yet are essentially ignored (if not actively combated) by the same “sizable part of the art world” that Graham cites.

I think parts of an answer can be found in the closing chapter of the new Gerry Badger book, The Pleasures of Good Photographs, and also in the writings of a certain Norwegian-speaking Minnesotan who moved to the Silicon Valley…

Due diligence declaration: I do really love the work of all the photographers cited below. Okay, maybe not Richard Prince…

An item that is to be conspicuously consumed for purposes of status is best consumed for that purpose only – that is, as an item which exists most completely to waste resources in a way that can be seen and appreciated by… well, people whose appreciation you desire. In the most desire-inducing scenarios, the item to be consumed should be unique as well. If you have the Rubens… well, no one else does. And a prominent-enough purchase can itself create Artistic Validity™

The behavior can extend to institutions– consider MOMA’s Bell Helicopter, which is made unique by the gesture of declaring it as Art – it wasn’t the first of its kind, or particularly iconic, but: its function is erased and its status raised as being, and Deyan Sudjic has pointed out, “the first helicopter to be displayed in the Museum of Modern Art” and hence Important enough to make the transition from the old museum to the newer current one.

In some quarters, such consumption is believed to be an investment – but at its extremes, even this aspect of non-status utility fades away. What matters is the status act itself, to purchase and display and collect that which only status can afford – an act that’s very different at varying ends of the social financial strata – while the poor might buy many cheap things, the wealthy may buy only a few stratospheric ones. No surprise, then, that the most expensive photographic purchases so far have been ones where that difference is laid bare: $3,346,456 for Gursky’s “99 Cent” (or similarly, $1,248,000 for Richard Prince’s relabeled cigarette advert.

(& I’ll ignore the $1.5M paid for a snap by Russian politician as revealing more about the Russian art market than about photographic standards.)

To the dismay of the usual photo website crowd, conspicuous consumption of this sort does not include consumption of camera gear, elaborate chemical formulas, new versions of Adobe Lightroom, aspect ratios, or even long-winded arguments about the “truth” of a photo, because “truth” – like moral convictions and even beauty – are ultimately utility functions of a picture, and the stronger the force of the image, separate from its market value, well… the more that market value may decline.

For the conspicuous-consumption-of-art crowd, images that are useful in non-status ways are, by definition, not aimed purely at the status and image of the buyer. They are dispersing and wasting status energy. That aspect has driven down the gallery valuation of representational painting and photography since at least 1850. If an image becomes famous, if it can be associated with something external, then its value can rise again, but only in narrow circumstances. One can pay a fortune for “Dovima and the Elephants” but it’s unlikely that anyone would pay similar fees (even if the printmaking were as controlled) of, say, the W Eugene Smith pieta.

There are ways to cater to “uselessness” (I am not happy with that adjective, but can’t find another one that’s more suitable). Formal Kunstakademie games that destroy the content in a photo while retaining its intrinsic photo-ness, like Sugimoto’s movie theatre or Ruff’s cartoon-oversized jpegs. Roger Ballen’s pix (in sympathetic company here) look like documents – but of what? Philip-Lorca diCorcia creates images that really are documents from the world, but the traditional notion of subject… well, that might be accidental. And likewise Jeff Wall et al, who document events that are not really “photographic” events from the world but merely imaginings. Images that keep the brand value of the artist and the status value of those very large prints close to the center.

And that: market value – is really the only thing that ART+AUCTION cares about. I’m dumbfounded that Graham doesn’t point this out, even though a few others have hinted at it. The portion of the art world that has Graham in a knot is the dealer portion of that world: the salespeople.

Market value has only tangential connection to “artistic merit” (for the right audience, art-for-art’s-sake, like technology, is just an opportunity to do marketing) and every art transaction – whether for money or simply for a viewer’s attention – is an individual one. This is true if you’re David Geffen picking up a spare Modigliani for the east guest room or a shopper picking up a vista of the Golden Gate Bridge from Ikea. The image, when it becomes your image, your object, is tied less to the History of Art and much more to what you perceive it to say about you. This is even true for Facebook posts. There’s no conspiratorial central hand guiding what “the art world” is, or what they “get.”

Not only that, but I don’t think it matters.

Photography is not painting. The “art world” Graham laments is one that grew out of previous cultural authorities (e.g., the nobility and church, who used to have the last words on imagery). But that art world has always worked along directions of its own, based on basic agendas of painting and other “object-centric” arts that are quite simply not at all well-mapped onto the nature of photography.

While more than a few photographers (and artists of all media) yearn individually for the cultural respect, authority, and the party calendar granted to the occasional Warhol, the truth is that significance of that “sizable part the art world” has long ago been marginalized by the photographic one, and by photography’s cousins cinema and publishing.

“Straight” photography respects no social order, least of all the ordination of “the art world” and their self-declared priests. A photograph is almost as likely to be used in opposition of its author’s intent as not, an attribute that many critics and nearly all dealers find confounding (one way to thwart the witchcraft: wait until the photographer and all subjects in the pic are most sincerely dead). But that unruliness, that inability to control who makes the picture, who sees the picture, who uses the picture, is the fundamental nature of the beast. As Gerry Badger pointed out, quoting Tod Papageorge: “my argument against the set-up picture is that it leaves the matter of content to the IMAGINATION of the photographer, a faculty that, in my experience, is generally deficient compared to the mad swirling possibilities that our dear common world kicks up at us on a regular basis.”

Allan Sekula might call the idea of photographic truth a “particularly obstinate bit of bourgeois folklore” but I don’t buy it. Pix or it didn’t happen, as the FB (and UPI) phrase goes. Photos (even the ones we know are “untrue,” say, in adverts) carry the real power of modern imagery, and what happens inside Sotheby’s is just a bubble. The Real World is wilder. I’ll let Jeff Wall himself have the last word:

I was interested in the way cinema affected the criteria for judging photography. Cinematography permits, and validates, the collaboration between photographer and subject that was largely excluded in classic documentary terms. That exclusion limits photography, and so my first moves were against it -- working in a studio with all the technical questions that implies. I had to learn some of that technique as I went along; that process was part of transforming my relationship to photography. At the beginning it was done in the spirit of contestation, but as I've said, it was not so long before I realized that I'd lost that contest and realized that nothing I was doing was "outside of photography." At that point -- in the mid 1980's -- I felt I'd worked myself into a position where I needed to come into a new relationship with the kind of photography I'd been questioning. As I saw more of the "new" photography in exhibitions through the 80's, I began to realize that I preferred Walker Evans or Wols to most of the newer work, and I preferred them to my own work, too. Classical photography might have been displaced from the center of attention by the newer forms, but it was not diminished in the process. It became stronger through having been confronted with alternatives, as far as I was concerned."