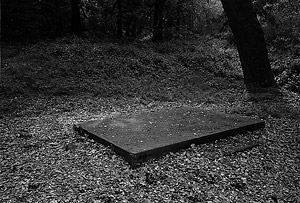 So the backlog is dropping — tonight’s trio leaves only a couple of C-41 rolls in the “pending” box, and both of those were shot by Rebecca — not me. I think.

I fished out three white-labelled DX-coded-for-ISO-100 rolls from the box, grabbed the changing bag and tall tank, threaded them up. Pulled out the snips of leader and…. they didn’t match. Two were the expected pinkish TMax 100 color, but one of the snipped leaders was gray. Huh? I turned on the PDA, checked the GoPix log. Roll “G100,” Apr03b, TMax 100, Stevens Creek landscape photos. Hmmm.

After fixing, check the rolls. It wasn’t Delta, it was Fuji Neopan 400, inexplicably loaded (by me) into a 100 ISO cartidge. sigh The development should still be in an appropriate range, we’ll look at the scans later, maybe tomorrow.

I’m not thrilled. Not so much because of the potentially-whacked exposure, which I doubt will be serious, but because the whole purpose of that roll was to be a TMax test, to measure resolution limits and contrast ranges. So the roll and the afternoon spent shooting it is now essentially a bust (okay, maybe it’ll show me some uninteresting info about extreme pull-processing of Neopan).

So I pick up the Handspring, change the record categories of all three rolls from “Pending” to “Processed.” Add a short bit to the header of G100: “Surprise! Actually mislabelled Neopan 400.” Press “Done.”

The roll appears in the list with the new tag, but lists no exposures. Huh? I tap the header, see the empty list, and the PDA locks up. No menus, no clicks, locked. I hit reset, reboot the PDA. All okay. Start GoPix. Locks up. Repeat. Same deal.

In the end the only way to unlock it is to delete GoPix entirely and reload the application fresh from my PC. So all of my GoPix roll notes are lost, going back to late January. Every roll, every tag, every exposure, all the notes lost. GoPix is now a blank slate, it doesn’t know about my gear, my shots, film preferences, nada. Start over.

This happened once before — the buffer apparently overflowed with active data, too much shooting. The GoPix author said he had fixed this bug, but I normally flush all the logs out to a text file every couple of months anyway. Not this time… guess the surge of shooting in late Feb pushed me too high.

I don’t even know at this point what the labels of those other TMax rolls are, still soaking in the final wash. One of them I know was from April, but the other? What about the roll in the Contax right now? Did I tag it Apr03e? Apr03f? Grrrr.