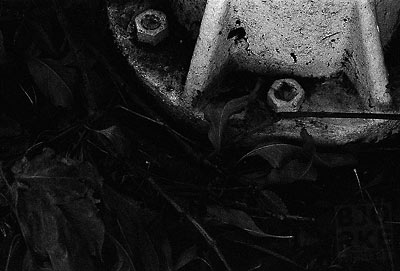 Three rolls Neopan Super Presto 1600, Xtol 1+1, 7:30. This photo from the same roll of Rodinal’d Tri-X as the previous shot; made perhaps 20 minutes after that portrait.

A few years ago most of the Japanese anime production business leapt into the digital age. Gone were the inks, gone were the cel painters. Had the quality and cost ratios finally reached the magic level where producers were ready to embrace the future?

No. What happened was that Fuji, makers of many things besides photographic film and Finepix cameras, was also the primary maker of blank animation cels for the Japanese industry. The business was weak, couldn’t bear higher prices, so they shut it down. Bang suddenly digital was a great idea.

There was no nefarious plot to change things, they just made a rational business decision about something that seems like an incidental product but that had ramifications far down the industrial food chain.

I was thinking about this today when I got my latest bundle of neg storage sleeves. I’d been unable to process anything for days, while I had waited for them to arrive from NYC. Such a trivial thing, but what if PrintFile’s owners decided tomorrow that they day of the 7x6 page was over?

People worry about not being able to find film in five years, or ten. That’s not what worries me. Heck, you can still buy Super-8 film.

What worries me is going to be the steady consolidation and loss of infrastructure, until some camel’s back will be broken by a catalytic straw that will force even the diehard film users into resigning themselves to a 100% digital work environment. I expect the day’s not far off when you can’t process black and white unless you do it in a homebrew developer or you use D-76, and the only darkroom equipment you can buy will be third-hand on ebay.

At that point, of course, wet silver processes will finally have dropped into the ranks of daguerreotype and collodion process — a pricey, eccentric fringe art. The worst practitioners will jsut rehash the glories of the past, mired in nostalgia. A few good ones, we can hope, will be still finding new purposes and meaning in their stinky fixer fingers.