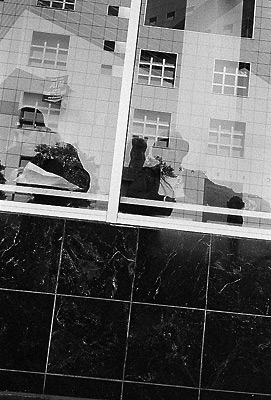 The latest round of film shooting was launched by the arrival of the RTS and lenses. The lenses, of course, were intended for the Cantax, but the moment I picked up the RTS I knew I’d have to shoot something with it. The finder is huge and luxurious, even compared to my Canon 35mm’s, and far larger than what’s visible in the digitals or the Contax G2. The 28mm felt like a 28mm, wide and with crisply-straight horizontals. It’s a great, sharp normal optic for the digital, but as a 35mm-format wide-angle lens, it’s fantastic. A great complement to its little brother, the 28mm G-Biogon.

I’ve been selling-off my film cameras one by one but am less convinced of the wisdom of moving them all on. Film shooting is different, and no amount of Photoshop tweaking will make it match film in terms of the picture-making experience. It’s a different thing, just as playing the oboe is different from punching-up “oboe” on your Roland keyboard synthesizer. For many purposes — even most purposes — they are equivalent. Digital is better for a lot of things, such as most kinds of journalism. But it’s not the same. I won’t get rid of all the film cameras just yet (though I still have a sweet AE-1 for sale, CLA’d and all), and the differences are enough to keep me occasionally willing to spend time spotting out one dust speck after another…

Last night Courtney & I went to see Arakimentari, the American-made documentary on Nobuyoshi Araki. He was busy with one camera after another during the shoots (some of the photos from those shoots are in the November 2003 PDN and the March 2004 American Photo), constantly pushing at his subjects with a compact digital then switching to the Pentax 6x7, then dragging his newest Leica to bars in Kabukicho but shooting the barkers on the street with the digi.

Is equipment photography? No, no more than a piano is music. But each instrument has its own character, and Araki-san manages to embrace them all. This, among so many things, must be part of why Daido Moriyama says that Araki, through his grasp of the physical aspects of picture-making, understands “the true nature” of the art.