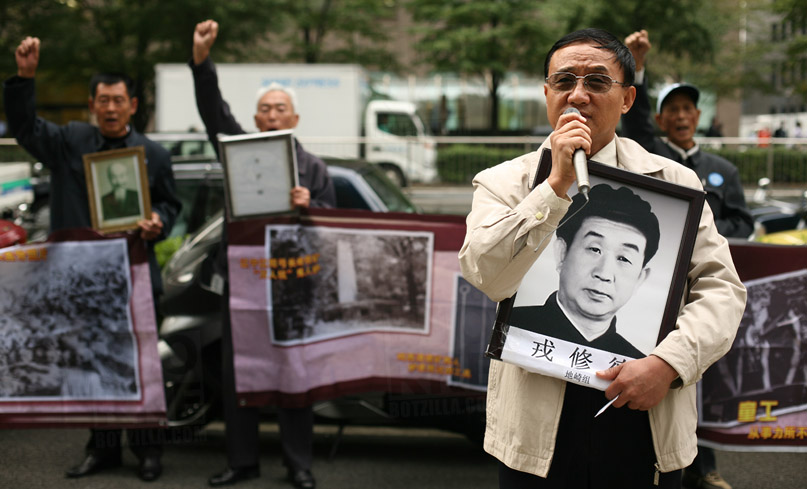 On my way to the Narita airport I stopped in Otemachi to have lunch with Dirk Rösler and Peter Blakely. As I emerged from the Ginza-line Exit 3, I was greeted not by by two hungry photographers but by a handful of amplified Chinese protesters, who were just getting warmed up.

They were shouting at a corporation in the office tower there alongside the station; demanding that the corporation of today, the remnant of a pre-war zaibatsu, recognize and apologize for its parent’s actions sixty years ago in Manchuria. I eventually learned that they come to protest in the same spot regularly.

At that point I was carrying a full complement of luggage. Clothing, books, heavy computer. Hard to make pictures, though the nature of Japan allowed me to leave most of that luggage on the sidewalk while snapping a few quick pics (with full confidence that the luggage would still be there when I returned two minutes later).

It’s easy to feel sympathy for these guys, who worked in slave-labor-like conditions many years ago. And their children. The resolution to their problems, however, is hard to envision. Is apology enough? Are the people who committed these old crimes still around? What responsibility do the executives today, most not yet born in 1936, bear? Can the new generations find it in their hearts to help? How?

And I wonder if. fifty or sixty years from this evening, we will see clusters of aging Iraqis and Americans shaking tired fists at the offices of American oil companies, at Bechtel, at Halliburton. What will our children say to them?