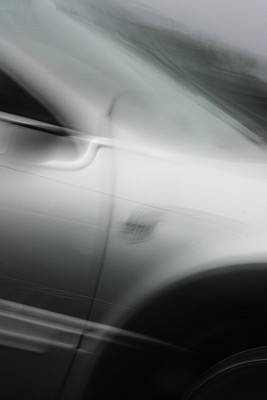 (This entry has nothing to do with John Matturi.)

As a followup to the lens hack of a few days ago, for laughs I thought I’d poke the Canon sensor into David Eubank’s PCam as a custom film format, to give myself some extra guidance on demand about technical details like Depth of Field. 22.7mm×15.1 mm, 3072×2048 pixels… so what should I choose as a Circle of Confusion size?

For 35mm, typically the CoC value is around 20-25 microns (0.02-0.025mm). Chances are that Canon (like most lens makers, save Contax and Leica, which are stricter) uses 25µ to calculate the Depth of Field markings on EOS lenses. CoC is a rather slippery number, based on subjective evaluations of 8×10 prints viewd from two or three feet away, which is why lens DoF markings for medium format cameras use a much larger CoC value — typically around 50&#181 — which is proportional to the larger negative size (which will in turn be enlarged less when printed to 8×10. In signal-processing terms, they are trading some spatial frequency for dynamic range, which is why MF prints have their characteristic “richness” in comparison to a same-size print from 35mm).

So for a sensor that’s 1.6× smaller, the CoC should be… around 15-16&#181 (Zeiss formula give 15.75µ). And the DoF markings on EOS lenses should be closer-together, too. But can the sensor get to that precision? And what about the change in field-of-view for smaller sensors? Don’t small sensors give you greater DoF?

The pixels in the sensor are around 7.4µ, so that CoC value is essentially above the Nyquist limit for a sensor of this size. As long as you’re printing to 8×10, there’s really little point to making a sensor with more pixels at this sensor size, unless you intend to combine them for greater color depth (the color depth in a chip like Canon’s is already a bit eroded due to the color-making pattern used to extract color images from a B&W sensor).

(Few users, without a very solid tripod, will get anywhere near this limit anyway, even with the best lenses. External factors (see photo) are always getting in the way….)

Further, it means all of the DoF marks on EOS lenses are wrong for this sensor (and by extension, to other cameras with similar sensors that use 35mm SLR lenses, like the 10D, 1D, Nikon 100D, Fuji, Sigma, Pentax *istD, etc) — the marks are all too wide.

But what about smaller sensors having greater depth of field, a fact so often trumpeted byt the makers of pocket digicams?

For the same field of view, the focal length will be shorter. So compare, for Canon’s 6.3MB sensor, the 28mm lens, versus a 45mm lens for a full-frame (36×24mm) sensor (same field of view). The pixels on the small sensor need to be smaller, forcing a smaller CoC, but the distance to the subject — proportional to the focal length — is greater. The effect of that subject distance proportion trumps the CoC concerns, so compact digicams have greater DoF. This means that the 28mm lens on a 10D will have more DoF than a 45mm lens on a full-frame camera, but it doesn’t change the fact that with a 50mm lens, the digital sensor will have less DoF (and a narrower field of view) than a full-frame camera at 50mm.

Circles around circles. So where do we go from here?

There are a few ways to go on this. One, taken by Olympus on the four-thirds system, is to just toss-away the old big-sized lenses, build lenses for the new format, and get on with things. Nikon could potentially follow suit, since they’ve said they like the smaller sensor too. So will Nikon start relabelling their lenses, or just ones specifically made for use with smaller digital SLRs, or just live with the erroneous DoF markers, or start making four-thirds lenses?

Canon (and Contax and Kodak), in the meantime, has started making full-frame digital SLRs. They’ve made one digi-specific SLR lens, the 18-55 EF-S. It’s rumoured that they don’t intend on making any others. It has no DoF markers. There’s a prominent gap in the Canon lens lineup — no rectilinear primes between 20mm and 14mm, which is exactly the length you’d want if you were trying to use a full-frame 24mm/28mm view angle on a small-sensor camera like the 300D. There are some zoom lenses in that range, but they’re huge, heavy, expensive, slow, less sharp than a prime, and of course the DoF markers are wrong.

My hunch — Canon will be pushing full-frame cameras down into the lower tiers of the DSLR line. My guess is a camera between the 10D and 1D, with a full-frame sensor, in the $3000 range, late this year.