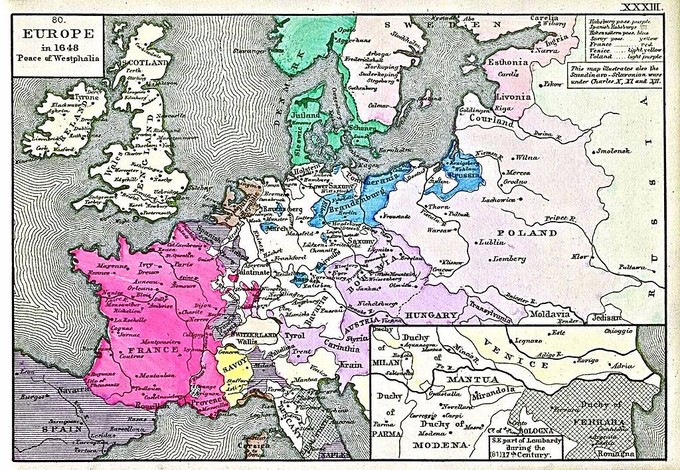 The excitement of 2021 about “the metaverse” hinges on hardware, but probably not in the way you think.

The enabling device is not a future perfect headset or muscular neuron sensing or brain-machine interface. No memex required. Instead, I’d like to offer some very noisy graphs and a map of 1648 Europe to explain what’s really going on.

There’s no such thing as psychohistory, but there are some useful models. Sometimes models overlap: the above graph overlaps the story of the 30 Years’ War.

First, let’s consider that noisy graph. Underneath the noise, it’s three “simple” curves describing the computation that’s available for different kinds of tasks, and how that compute availability changes over generations of hardware. Precise values of how fast and by how much are speculations, but stick with me here, the core idea remains the same regardless of scaling.

If we remove the noise, the split between different kinds of computation environment becomes clearer.

The smooth center of those graphs represents the core computational capacity of the available hardware over calendar time: over months, over years. The essential message of Moore’s Law is that chip capacity grows more or less exponentially. That exponent is driven by the nature of the geometry of the chips, the materials used, and the tasks they’re assigned to calculate. The noise portion of the graph (a mix of absolute fixed-value and relative-value noises) represents varying applications, regulations, clever coders, etc. When variation between platform capabilities are small, these noisy factors dominate.

There are many kinds of computer but for clarity I’ve split this idea into three curves where the capacities of a single local computer are shown outpacing the capacities of a browser running Javascript on that computer, and finall the power of parallel, throughput-focused datacenter-based HPC (High Performance Computing), which outpaces both of the others. While the specific exponents of growth might historically vary, the basic orderings of these relationships aren’t controversial.

Despite all the best attempts at adding WASM, WebWorkers, WebGPU, etc, the browser simply can’t keep up with its own local hardware while remaining general enough to be considered a browser. It wasn’t designed for that, which is one reason why most of the bigger advances in web technology over the past decade or so have been about developer productivity using tools like React, not about improving compute (we’ll get back to that).

If we extend the time scale, the absolute noise mostly vanishes and the three signals start to show their differences clearly.

Over time, the relative noise – that is, variation based on compute capability itself – for that top track pretty eventually becomes larger than the entire range of the lower curves.

The left side of this longer chart is important – compared to the later growth, it’s nearly flat. The variation in capabilities, and the noise, barely register. The first graph was a close-up of part of those early years, where the noise dominates. Later on, it’s a completely different story. A big anc conentious question: where on this graph is today?

These relations have limits, and sometimes noisy variations can even point down – larger monitors slow down web browsers, for instance. Amdahl’s Law, limits of fabbing, network latencies, consumption of compute and network bandwidth by freeloading advertisers, supply chain issues, political constraints on shipping – they have impacts, but over time each of them fade.

But what does this have to do with the Thirty Years’ War?

Quick recap: The Thirty Years’ War essentially shredded the internals of the Holy Roman Empire. Some parts of it saw as many as 50% of the local population dead. The Holy Roman Empire had been set up and crowned way back in 800 AD by the Pope, and declared the only “true legal inheritor” of the Roman Empire. After 30 years of nearly everyone in Europe fighting everyone else, the Empire was reduced to a fraction of its size and, importantly, the Pope was no longer calling the shots. The war was, in many ways, because the Vatican knew what was coming and by 1648’s Peace of Westphalia they’d realized they could not stop it. After that, it was the Kings and Princes who decided which versions of God and Church were to be allowed or disallowed. Adios, Papa.

The thing is, the Pope and Catholicism didn’t ever fully disappear – their authority was reduced, and has kept shrinking through history as Napoleon feels okay arresting Pius VI in 1769 and Pius VII in 1809 or Mussolini isolating Pius XI’s authority to only two square miles around the Vatican in 1929.

Likewise the Holy Roman Empire limped on for quite a while, but in such a reduced state that Voltaire could mock it in his essay Customs as “neither Holy nor Roman, nor an Empire.”

Similarly, browsers won’t disappear – but over time their value continues to decline, being reduced to a framework for retailers and a few small games, all of which see the real action being performed offscreen on the growing arrays of servers and compute clusters.

If European history isn’t a good analogy for you, consider instead radio and television. Amazingly, television came first – George Carey’s “Selenium camera” of 1876 was already in Scientific American for the June 5, 1880 edition, years before Marconi was giving demonstrations. Images sent over radio waves were a real thing by the 1920’s but the experience was expensive and not all that great. Radio media dominated, but Farnsworth’s 1927 invention of electronic television (rather than using mechanical beam-aiming) put the technology on an exponential curve of improvements.

The big split happened around 1950, as these charts from Saylor and Science Direct reveal.

In the early days of TV’s success, program content followed radio formats closely – some radio programs like Gunsmoke even jumped the divide when the audiences were moving. Over times, we’ve seen those formats mutate. Episodic radio shows have nearly vanished, and TV quickly developed its new forms and rituals: Saturday Morning Cartoons, the decline of baseball in favor of football and basketball, and later the youtubes and HBOs. Ideas that really don’t make sense for radio.

So Where Does That Leave the Browser?

Depending on where you think we are on the graph, and how the scales shake out, things don’t look good, long-term, for the browser. The rise of computationally-intensive ideas like Deep Learning, Crypto currencies, and Metaverse applications indicate to me that we’re already passing into the steeper part of the chart where capabilities are peeling apart faster than software product cycles can adapt (this was true even a decade ago in some quarters: when I was at Nvidia, we passed the point where it took longer to create a AAA video game than the product cycles of AAA game hardware).

Yet weirdly when people are encouraged to learn to code, we give them: Javascript.

It’s where some jobs are now, I get it. Or worse, maybe it’s where the jobs were when the training website was prepared in 2013. But the long-term returns for getting locked-into JS’s mentality and the browser DOM model are questionable.

While the browser isn’t vanishing instantly, there are many applications for which the browser’s contribution is already reduced to noise:

I’m sure you can think of many more.

For that last one, “the Metaverse” – whether hi-def or low-def – is much deeper than what you see on the screen or in your goggles. Those increased demands are largely what makes it more than just another walled-garden game. Physics needs to be calculated, poses estimated, textures and patterns recalculated, loads balanced and synchronized… The computation that’s required beyond the visible pixels has to be deep, fast, connected, secure, and able to scale to a very wide range of complexity.

The truth is, “the metaverse” might just be a blip in the course of this history. Right now lots of people have identified a range of computational possibilities and have wrapped a little ribbon around them labelled “metaverse.” The truth of what can be accomplished may be far more amazing.

Hardly anything has been invented yet.