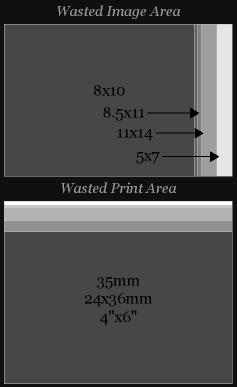 It ticks me off.

Yeah, you can always add borders to the image, but that’s really just a way of shuffling the waste around to make things seem better. In fact it’s more wasteful, given that you end up having to print smaller. A 4x6” print with a half-inch border all ‘round is 5x7” but it’s silly to call it a 5x7 at that point, no? Almost a third of the paper is just tossed-away as white.

Which leads me to the actual reason that I have time tonight to rant about aspect ratios. I was going to process three rolls of Delta 400 tonight, but I ran out of PrintFile pages. My film scanner takes six-neg strips of film. A 36-exposure roll therefore can fit onto six strips — maybe seven if you get an extra frame or two, and neg sleeves that are seven strips by six negatives are next to impossible to find — so I’ve run out, and have to wait until I get the next batch from B&H, which seems to be the closest supplier who normally has the right kind in stock.

Why are these sheets so hard to find? My guess is because they’re not wasteful enough, which is simply UnAmerican. With 6x5 or 7x5 sheets, you need at least two sheets to handle a single roll of film — and two sheets of paper to contact-proof it, to boot. Smaller sizes are everywhere, but 7x6 is rare — a specialty item among specialty items (oh, and here’s a little endorsement: VueAll bad, PrintFile good).

A 7x6 neg sheet, proofed on 8.5x11” photo paper (which was already hard to get before, but now seems to have completely dried-up) let you proof a whole roll in one page, on one sheet. Having 8.5x11” photo paper that matches the print size used in business and photo printers, that matches the size used by binders and file cabinets everywhere, makes perfect sense. Who is benefiting from all this waste and confusion?

And how come frame shops only have a tiny selection of “document” sized frames? Or if you want to matte your document-sized photo to 11x14, forget about finding a precut matte.

I blame globalization. It’s gotta be.