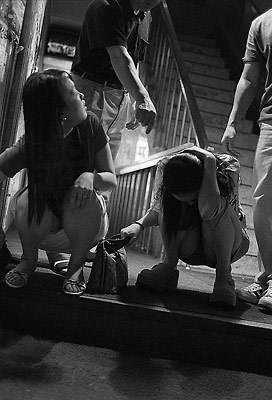 A few days ago, documentary photographer Rob Appleby opined that for him, the photo essay was a dead form, that he’s busy looking into something a bit more meaningful, to Rob himself and hopefully to his audience, whoever they may ultimately be.

Personally, I think there’s rarely such a thing as a truly dead form, not in a general sense. Individual veins may tap out, but the mine stays open.

Schönberg commented, even as he developed his own tonal scale, that there were still many masterpieces yet to be written in the key of C major — what’s true for piano works is surely also true for image-making. A form may feel exhausted to individual practitioners, or perhaps has grown tired from extended rehashing of its own best successes — but there is always the potential for something new, fresh, and meaningful to be drawn from existing forms.

I thought about replying to him with a pointer to the work of shooters like Simon Roberts or Simon Norfolk — imagine my dismay when I discovered that despite their apparent successes (even in black & white!), their shared agency, growbag, is closing. I’d like to think it’s closing because its members have grown too successful — please tell me it’s so!

Then the September PDN shows up, with their annual photo-j issue. More photo essay — Stanley Greene in Grozny, Jeun Gaumy on the Atlantic, dead-on classical form, black and white with strong, sure hands.

In the emailed conversation that followed Rob’s remark, the subject of Gene Smith came along (gee, who’d’a thunk?), and it was lamented that none of the photography we’ve seen in recent months from the Iraqi invasion had the passion of Smith’s WWII pictures.

This thought has been bothering me for days now. Is it true? Is it not? And if it is, why?

I can only imagine, if it really is so, that it’s due to the usual culprit implicated in the collapse of the great PJ magazines like LOOK — the culprit, of course, is television. If you are good, they stick you in television, from journalism school onward. TV has the money, the audience, the staff. So where are those passionate video essays?

Dumped onto a hard disk and backed-up somewhere perhaps, but not on the TV. Sadly, TV has succumbed to the Cult of the Standup — no matter how gripping the images, nothing seems to be shown on TV without having a voiceover, or more likely a dull shot of some Important Personality standing up in front of the shot and yakking into a handheld microphone, preferably with a network logo and the word “LIVE” blinking over the other open portions of the frame.

It’s grotesque. One station here in the Bay Area can’t resist the lure of the blinking LIVE stamp, going to ridiculous lengths to always ensure a maximum number of such stories are included in their late-evening broadcast. Of course there’s no news going on at the time — so we’re treated to a simple camera-lit shot of the same reporter as the night before, standing in front of a locked-up courthouse or along the shoulder on Interstate 880 or some equally nondescript dark location, talking about a news story that occured earlier in the day. “LIVE”? They might as well have broadcast a taped radio show.

TV has the advertising money, but they fail to get the real story. As long as this is true, there’s an opportunity for PJs, whether it be on the other end of the world or their own back yards.