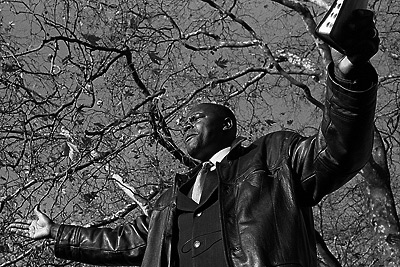 In the past couple of days I’ve run across notices for two established and Contax-related sites — based on photos, not gear.

An interview with Luc Delahaye talks about his experience shooting, among other things, his series “Wintereisse,” which was reputedly made with the G2. Delahaye also is no slouch when it comes to kicking over a few cans around the Magnum Agency crowd, with comments like “Cartier-Bresson… didn’t really need to put the film in the camera — the importance for him is the act of taking pictures … being in the right position and being fast.”

(Supposedly Josef Koudelka had a similar moment of Magnum-founder-busting, leaning into frame during a Cartier-Bresson TV interview to say “Henri, you are so full of it!”)

Or again from Delahaye: “[Salgado]… is a cliché-maker. He is producing what everyone has in mind.” Another good healthy Photo Rant.

Best of all, the photos are terrific.

On the other side of the planet is our own Contax homie Eddie Ng, whose website I’ve just found featured in the December issue of the UK <a href=”http://www.gmcmags.com/bw/index.html” target=linkframe”>Black and White Magazine.</a> I’ve known enough to mark his site (even without an RSS feed) on the PhotoRant blogroll for a long time.