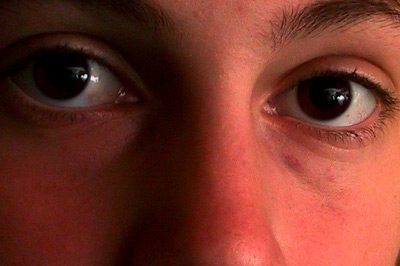 The simplest and most common use of photography is, as Roland Barthes famously put it, a unary purpose — that is, a direct representation of a thing. The photo is (within a limited scope) interchangeable with that thing. We take the tiny snapshot from our wallet and say proudly: “There’s my son.”

That photography is not really as directly literal as it looks is something that is constantly at play in the world of art photography, and a hot potato among journalists and their editors; but we usually assume simple unary purpose and function for less rarified pursuits, such as the simple representation of domestic events. How untrue this can be was brought home in a personal way very recently.

Several months ago, I allowed my children to take a brief trip away from home to visit an ailing relative and their cousins. A day after their departure I received some desperate cel calls from them, asking me to come and get them please (an eight hour drive, to a hotel I couldn’t identify), they were all alone with no relatives were around, just the person who’d brought them; followed by another angry cel call in the middle of the night from their supposed caretaker, cut off when the phone battery abruptly died. The next morning, I receive a landline call saying that they’ll be home soon.

When the children returned another day later, my daughter had a fading black eye, scratched-up arms, and told me she’d gotten them, a couple of minutes after the celphone had died, at the hands of the person who was supposed to be caring for her on the trip. My son told me the same story.

It was the weekend, late in the evening — I took photos of my daughter’s injuries, expecting to deal with the appropriate attorneys and/or authorities during the coming week. In the following days I discovered that I was being sued, to lose custody of my children, by the same person who had taken them on this trip. So now the bureaucratic machine starts to grind, absorbing everything in its path.

In go the photos to the court, but it takes months before they actually get to anyone to investigate. The investigator promptly sets the report aside, not even bothering to contact me. Why? I ask weeks later, trying to find out what has happened. “Lack of evidence.”

Photographs? Meaningless. How do they know they weren’t staged? How do they know I didn’t injure my daughter myself? Or maybe this was self-inflicted? How do we know that these children won’t just say whatever I’ve trained them to say?

I was astonished, shaken from my naïve faith in the power of the image. Are they saying this image isn’t real, that it’s been edited and altered? Not at all. They take it at its direct unary reading. So then surely, I’d think, at a minimum, we have: a photo of an injured child. The children tell a story about this, and the photo appears to match. If this person did what the kids say, that person has committed a crime. If in fact I caused this, haven’t I committed a crime? Isn’t protecting a child worth even checking? If it’s all a fraud, isn’t that some other crime? No. And sorry, sir, but this is not open for discussion.

So the issue never goes anywhere near the indignant self-righteous posturing about “dangerous” aesthetic practices on web threads like this one on photo.net, which in turn was spawned and then became the subject of one of Michael Johnson’s Sunday Morning Columns. There’s no argument about film versus digital, real versus staged, editing or altering or distortions. It’s simply not an issue — as far as the legal system is concerned, photographs (and the testimony of minors, even informally) don’t mean a doggoned thing when it comes to trying to grasp at The Truth.