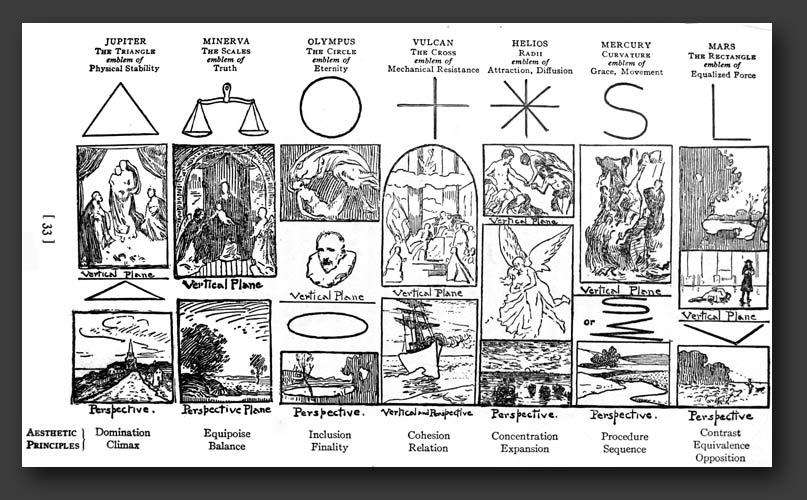 Poore again. This page was in his last 1933 book, the long-out-of-print Art Principles in Practice — a sequel to the only book of the series still in print (the first one, oddly enough), Pictorial Composition and the Critcial Judgement of Pictures. Pity this little taxonomic chart isn’t part of that still-popular paperback.

I call this the AMOT*SL chart.

Okay, I know. It’s hard to suppress some 21st-century giggling when we see the cute correspondences he assigns between shapes and Roman gods, or a po-mo shiver of dread when he uses words like “truth” and “eternity.” Yeah, yeah, yeah. We are so much smarter now.

Whether you like his chart or not, Poore nailed a large share of the constructive principles in renaissance and Academie painting on a single page. He even applies it to cubism and futurism, then examines Japanese and Chinese painting and tracks the changes in eastern and western art making through the 19th and early 20th centuries as these traditions collide.

I find it a handy set of considerations when viewing older art and photos, if only because the people who made that art believed it. It’s a bit like religion: you need not believe in Jesus’s divinity to appreciate Leonardo’s Last Supper, but if you don’t know the Lent story at all, you’ve missed a lot of what’s in the painting. Leonardo seemed to believe it. His clients did. Viewing that art after reading Poore is to realize your eyelids have been brushed by the magic wand that lets you know what to look for.

Recent years have brought changes. Movies and video games challenge compositional strategies by adding motion and editing multiple images into the same frame through time. The snapshot asthetic defies all compositional planning and in the extreme leans far to the left to rest soley on content — no one talks about the savvy cropping and distribution of forms and gradients in a photo of Wolfgang Tillmans’s bar escapades.

But AMOTSL is with us every day, in the quick-to-read snappy advert image, the layouts of our books, our TV shows, computer desktops, the camera-club ribbon winners, our relics and icons. Indeed there are no true relics and icons so new that they defy the classic suite of AMOTSL principles.

Photographers may notice that a few well-worn standards (or naïve crap, depending on what sort of day you’re having) seem to be missing. Where’s the golden mean? The rule of thirds? The thrust of a diagonal line, ascending or descending across the frame? What about square format, selective focus, perspective, and filling the frame?

Here’s one answer for now: “diagonals?” Poore subclassed it from the “L” or rectangle composition — using the shape of the frame as a compositional element (a corner-to-corner diagonal is one part of the “golden triangles” construction rule). The others… I’ll leave for some other posts.