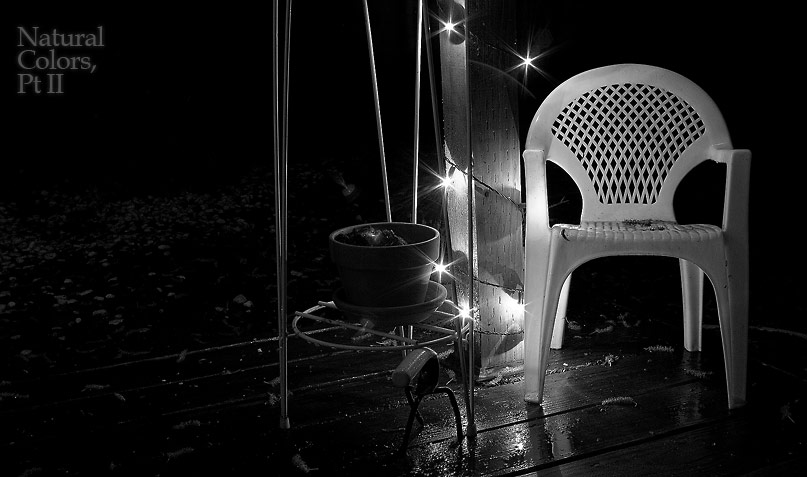 While I was typing Pt I (without even thinking that it would become Pt I), part of the paradox vexing me was there on the desk, staring intently from the cover of the January PDN in the form of Jude Law, shot in classicly-crisp B&W by David Bailey, with the tag: “The Legends Issue.” So here we have Jude Law, promoting Alfie and dressed-up in 60’s Saville Row. Knockout pic, but — part of The Problem of B&W Nostalgia, right?

Such “Legends” present their own paradox — photographers who continue to do new and inspiring work even as the world seems to be moving off in some other direction. Plachy’s last couple of books, for example, have knocked me flat — terrific, inspiring, humbling stuff throughout. But are artists like these exceptions partly because they can carry that history with them like a shield?

The problem that was picking at me in the previous entry really was: where are the great new B&W photographers?

I admit, I’m showing some awkward bias here. Why is new so important? Maybe it’s not. There are plenty of folks for whom pictures are pictures. The subject of my pondering is black and white work that isn’t the continuation of work begun long ago, and simultaneously work that doesn’t lean so heavily on nostalgia for its interest and authority. As the ever-contentious Bee pointed out, for him all B&W that he sees these days he considers “morally suspect.” As much as I hate it, I’m more than a little inclined to agree with him.

Years ago Walker Evans derided color, saying it “sentimentalized” images. He chose not to use it. Today, due to changing fashion, it seems like it’s B&W that all too often sentimentalizes.

Deuce of it is, I love black and white.

Salgado’s latest project (and his last, he claimed when he visited fotovision/UCBerkeley a few months back), Genesis, is shot on B&W film. One assumes the Tri-X he’s long admired, probably run by the same lab in Europe, developed by inspection in Rodinal. But even Salgado has bent, releasing his well-loved Leicas for a 6x7 camera (the better, one assumes, to create the large, detailed images that recent technological changes have brought to the art and publishing worlds).

Salgado loves black and white. Says he doesn’t know what else to do (though he certainly has worked in color back in his working-PJ days). Some other established shooters, like Josef Koudleka, have said much the same thing. It’s hard to imagine, say, Keith Carter or Michael Kenna prints in color. Some folks just love black and white, and always will (for me it is the natural color for photos, and color is more an addition). YMMV, but fashionable or no, those people will make (are making) the next great B&W pictures.

In the same magazine rack beneath the PDN were a few recent issues of Shots. A great thing about Shots is its pattern of growth and change even as it has changed hands — I can still remember when it was crudely pasted-up by hand, printed on newsprint, and now under Russell Joslin it’s still not the slick reproduction-fest of the relatively-conservative Lenswork or uber-conservative B&W, but Russell keeps getting The Good Stuff. Instead of seeking-out new B&W work, good work seeks out Shots, because people can recognize what a Labor of Love it is.

The new self-portrait issue (87) is no exception, including not only PDN’s 30 winner (for color!) Cig Harvey but innovative B&W champs like Arno Rafael Minkkinen (if you can, check out Arno’s Egg episode, too).

(and on the subject of the PDN 30, I was remiss not to post links to the three B&W portfolios: Dave Anderson (also interviewed in Shots 85), journalist Casper Dalhoff and editorial shooter Matthew Pillsbury)

The toy-cam and “Antiquarian Avant-Garde” revival movements (often falling into nostalgic traps, but not universally) sometimes show up in Shots too: an older issue interviewed Gordon Stettinus and of course who can forget the “new dags” crowd, most-famously Jerry Spagnoli, who was working hard at alternative process long before his famous 9/11 photo (and its impressive auction price).

If you have more suggestions for B&W that should not be missed, please post them here.

A few days ago Joerg pointed out the self-congratulatory PhotoBloggies. They have a variety of categories, including nominations for “Best Black and White Photography of a Photoblog: Recognizing the best photoblog featuring mainly black and white images- digital or scanned from film.” Funny that they feel they have to qualify film or digital in this category. Sadly, only two of the five finalists even meet the stated entrance criteria (ah, awards… who said popularity was only important in middle school? Oh yeah, high school students, dissed by college students. It all comes back to me now).

Of the remaining finalists, I personally voted for Ed Leveckis with rigent close behind.

For Toy Cameras I’d go with Gord Is Dead and overall for Orbit1.

Not that anyone in that voting crowd’s listening to me.