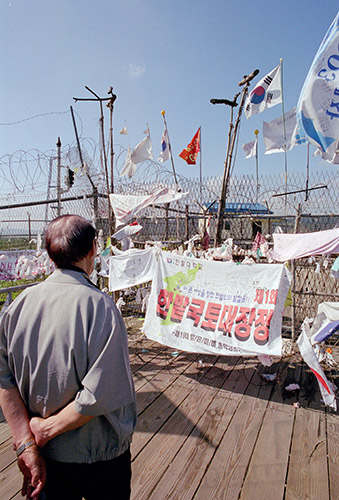 Marc Hauser is a professor at Harvard’s Deptartment of Cognitive Evolution (a fully different person from photographer Marc Hauser), and his recent book Moral Minds is chock full of morality tests. These tests take the form of little thought experiments, similar to those math “word problems” of trains leaving Chicago and Philadelpha at the same time at such-and-such a speed. Unlike the meeting of two fixed-speed trains, however, these problems don’t have fixed answers — rather, they are presented as a means for the person taking the test to shine some light into the internal nature of their own moral sense.

Standing on a footbridge spanning the railroad tracks, Frank sees an empty, out-of-control boxcar about to hit five people. Frank's leg is stuck in the railing, but next to Frank is one person who he can push, causing the one person to fall off the footbridge and onto the main track where he will be hit by the boxcar. The boxcar will slow down because of the one person, therefore preventing the five from being hit....

The accumulated responses to these questions about fictional Franks, Roberts, Donnas and so forth, answered repeatedly by many different people with widely varying backgrounds, have come to reveal certain broad truths held in common by people everywhere — that is, a common core of human moral response.

In this snippet above we can already discern varying forces: there is the moral weight of saving five lives versus one, but also the moral weight we ascribe to the means toward that end: if Frank pushes the other person, is that different from, say, Frank diverting the boxcar to a side railing, saving the five but striking someone on that other track? And beyond the stated scenario (such tests caution the reader not to invent additional details, but make decisions for purposes of the test based upon the scenario alone), variations come quickly to the imagination: What if Frank only discovered that fatal ramifications for the one after he’d pulled the lever that saves the five? What if the one, or any of the five, were people known and recognized by Frank? Friends or enemies? Adults or children? What if instead of five it were three, or seven, or some unknown number? What if any of those people wore the uniform of a railroad, and thus could bear some responsibility for the rogue boxcar? What if he heard the voices of a group of people on the track, rather than actually seeing them?

What has been emerging from queries like Hauser’s is a picture of underlying human morality, one that has elements that are not driven (to the annoyance of some people) by the various commandments and traditions of any single culture or religion, but apparently by something fundamental about the way that human animals and their brains have been structured by evolution.

Humans have a natural tendency toward actions that we consider morally positive, whether they involve either help or harm, in just as certain and unconscious way as we are naturally inclined to enjoy the taste of a strawberry or the sight of an attractive person. It may be no coincidence that we describe both what is pleasing and what we are morally inclined toward with the same word: “good.”

Such research contains several branching questions, such as what parts of cognition are involved in morality, and how did it evolve? What seems clear regardless of those answers about “how,” is the certainty of the “what”: that there is some moral kernel to humanity, a natural tendency towards human behavior that is as universally present and consistent as is, say, the broad human capacity for language. Humans everywhere may not speak the same language, but they all speak, and basic lingual concepts like nouns and verbs are found everywhere. The sphere of possible languages is consistently-sized the world ‘round.

Similarly, all humans share some core concepts of morality, such as the distinctions and interactions between ends and means; the concepts of “right” and “wrong;” the preference of protection of kin; and likewise a preference for immediate aid over remote aid: one is more likely to give a dollar to a stranger needing train fare in their own neighborhood than to a starving family in a remote country.

And here, I think, is where photography re-enters the stage.

Just as proximity is important in choosing who we are likely to help versus those who we are less likely to help, proximity plays a role in managing our ability to harm. For thousands of years it’s been known that not only are an army’s archers safer from an opponent’s battle axes than are the front-line infantrymen, but also: an arrow fired into the distance, alone or as part of a united volley, is an easier thing to loose than it would be to stab the same victims at close range. Not just physically easier, but morally less cumbersome. You don’t have to look your victim in the eye. It’s even easier, the more remote one becomes— not only for users of the musket, the artillery battery, ICBM or stealth bomber, but most of all for the generals and kings who can observe the progress of destruction through their field goggles or even at their desks while receiving dispatches from the front. One can hide the faces of the doomed behind distance, behind obfuscatory language like “collateral damage,” or the comfort of hard-to-grasp and indefinite numbers like 25% or 30,000.

Everything is easier to take if we don’t have to see it — even prisoners in firing squads are given blindfolds as a “humane” gesture. And thus Lewis Hine’s famous admonition and split goal for photography: to show those things that ought to be seen, and those that must be stopped. Hine, and all the socially-aware photographers before and after, knew it in some way: to see is by itself morally compelling.

In the hundreds of thousands of years before photography, the years in which our moral mechanisms were evolving, one might hear about a distant injustice, but to see it required proximity, and proximity has a hard-to-resist sense of participation. Photography brought that sense of moral connection into the parlor of the even most sheltered households.

War photography, I think, is different from other forms of moralistic photography here, because almost all war photography is horror photography. We can do nothing for Matthew Brady’s fallen Confederates, nor can we choose a specific action in response to Luc Delahaye’s sprawled and broken Taliban. Gene Smith’s image of a G.I. holding a baby found in the jungle shocks both by contrast between the soldier and child, and then in horror when we read the matching text. These images sell magazines, they move newspapers, they are immediate and “hard hitting,” but do they impell towards action on the part of the viewer? Or are they too spectacular for response?

Smith was adamant in his opinion that every photograph should resonate as a blow against the very nature of war itself:

My beliefs, my camera, and some film. These were the weapons of my good intentions. My camera, my intentions, stopped no man from falling, nor did they aid him after he had fallen. It could be said that "photographs be damned, for they bind no wounds." Yet, I reasoned, if my photographs could cause compassionate horror in the viewer, they might also prod the conscience in the viewer into taking action…

Know that these people of the pictures were my family — no matter how often they reflected the tortured features of another race. Accident of birth, accident of place — the bloody, dying child I held momentarily while the life — fluid seeped through my shirt and burned my heart — that child was my child.

I can’t help but feel that such an enterprise is hobbled by mistakenly trying to tie two urges together as one. I don’t think there is truly an such thing as “compassionate horror” — rather there are two simultaneous reactions when faced with the sight of people destroyed by conflict. Compassion pulls people together, but horror pushes apart. No amount of compassion can restore the life of Capa’s Spanish partisan, nor that of the frozen shapes in Baltermant’s Sorrow. Horror wins.

One thing I’ve never seen: a photographer who is neutral on the topic of war. There may be some who view it as an inevitability, and many who will not choose sides. But I can’t recall hearing of any photographer who seemed really enthusiastic about the purpose of war, any war, after more than a day of covering it.

Perhaps chillingly, one of the inclinations discovered by Hauser and others within the human moral engine is that doing something bad is worse than letting something bad happen. Being a non-particiipant with a camera is, we somehow feel, neutral ground.

If Gene Smith was unable to change the surety of armed conflict, where were his photographs successful?

Where his compassion was unbound, free from horror. As examples, consider his work on nurse midwife Maude Callen, who clearly inspired tremendous compassion in Smith himself and his Life readership, who felt compelled to help through letters and donations to found a new clinic that survives even today.

Smith’s piéta, part of his coverage of the tragic vicitimization of the people of Minimata Japan, images that overcame horror with compassion and led to substantial and lasting change.

As Hauser has said, he doesn’t advocate any specific moral, polical, religious, or social agenda — though he feels that his work impinges strongly on all of those fields. What he does assert is the belief that those policies and actions which most-naturally map onto our foundational moral sensibilities will be those which are most likely to be accepted by the populace, and which are most likely to stick around, without shifting on the winds of fashion. Policies that suit us as the animals we are.

When we see another person, even in a photograph, we feel a connection to them. Hauser’s work hints at deep reasons why this is so. When photography’s power is used to incite not horror but compassion, that power is at its zenith, and most-capable of expanding our moral circle. It does not seem capable of doing otherwise.