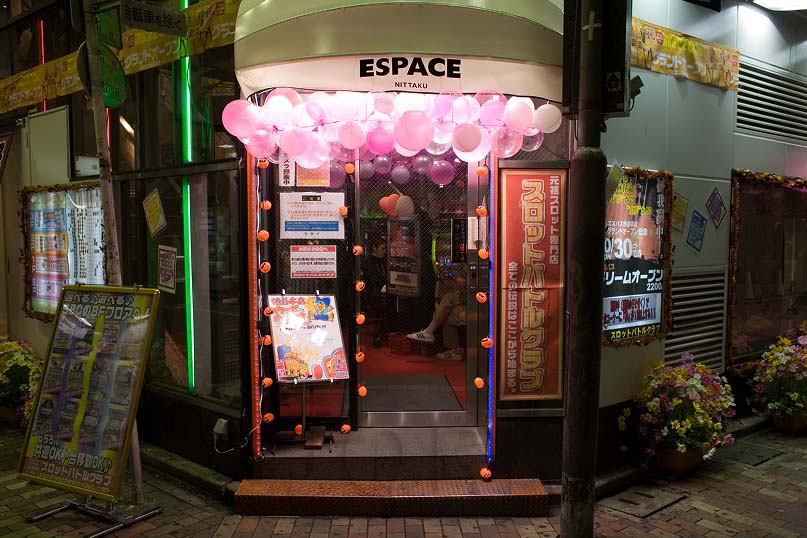 Last night as I was wandering back to the hotel and wandered through a few pachinko and pachislot halls, I was struck by the people who were watching, like the guys in this photo.

Inside the parlor I could understand — the players’ friends or whatever. But what about the folks gazing steadfastly from outside, through the windows?

My initial reaction was that the players they were watching — at that hour near 9PM, mostly older folks — were seasoned, expert players. That the spectators were watching to see How It’s Done in the same way that I used to lurk in video arcades watching as some over-caffeinated guy ran the score up to the max 99,999 playing Defender.

Considering I’d always thought of pachinko as strongly random, I realized that there were subtleties of the game far beyond my grasp. What could I be missing? I asked myself while watching a grayhaired lady dump another plastic cup of balls into the hopper on her machine, her attention too focused to notice the unlit dead cigarette still in her mouth.

But a morning later and the meaning of my looking (and my pictures) has already changed as I’ve learned to reinterpret those “seasoned” players as kamo — suckers — and the spectators as “hyenas,” waiting to move in if the kamo loses big and leaves an unplayed bonus round.

Another lesson in how photography — like all observations — can be so easily upended and all our intentions for it thwarted.